Teams That Have Been Coached By Ralf Rangnick 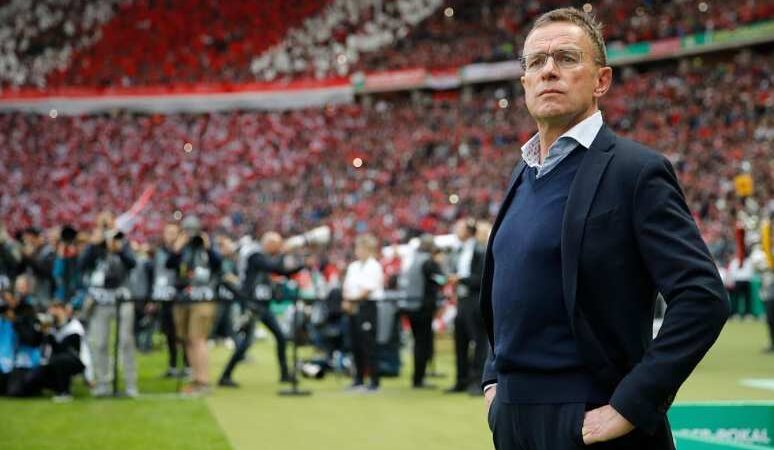 Ralf Rangnick is a legendary German football manager and sporting director who has coached several teams with great success. He has been an inspiration to some of the modern coaches the likes of Jurgen Klopp, Thomas Tuchel, Julain Nagelsman, and Ralph Hasenhutti.

Ralf is a tactical genius, he is renowned for his inspiring approach to the game and his ability to get the best out of his players. During his impressive career, Rangnick has managed teams in Germany, and England just to name a few.

From his time at VFB Stuttgart to his current role in Austria national team, Ralf Rangnick has proven himself to be one of the most successful managers. However, this post will explore the teams Ralf Rangnick has coached including his feats in each team.

Here are the teams Rangnick has coached;

READ: Teams That Have Been Coached By Erik Ten Hag

In his early career in the 1980s, Ralf Rangnick was a player and a coach at FC Viktoria Backnang in his hometown from 1983 to 1985.

In 1985, Rangnick left FC Viktoria Backnang in his hometown to continue the same position as a player and a coach in VFB Stuttgart ll where he spent two seasons.

Ralf left VFB Stuttgart ll in 1987 to join TVS Lippold Osweiler where he also acted as a player and a coach though he spent just a season.

Rangnick was without a team for a year before securing the position of head coach at SC Kobo from 1988 to 1990.

After spending a year coaching SC Kobo, VFB Stuttgart appointed Rangnick as their U19 team head coach where he spent four seasons including winning the U19 Bundesliga trophy.

After he left Stuttgart in 1994, he was without a club before being appointed as head coach of Reutlingen 05 in 1995 where he spent two seasons.

In 1997, Rangnick returned to his former club, Ulm after leaving his position as the head coach at Reutlingen 05. Ralf’s success as a coach began when he won the Regionalliga sud championship in 1998 including a promotion to the Bundesliga in 2000.

Rangnick took over as coach of VfB Stuttgart on May 3 and managed the team’s final five matches, finishing the 1998–99 season in 11th position. His debut match ended in a 2-0 defeat to Bayern Munich.

Rangnick had previously played for the club, coached at the amateur and under-19 levels, and was now the first-team coach. The team finished the 1999–2000 Bundesliga season, his first complete season, in a solid eighth position.

The squad managed to go through the round of 16 in the 2000–01 UEFA Cup after winning the UEFA Intertoto Cup and the DFB–Pokal semi-finals. However, Stuttgart fired Rangnick after their February 2001 European elimination.

Rangnick took over as the head coach of Hannover 96 of the 2. Bundesliga on May 23, 2001. And On July 30, 2001, he made his debut as the manager against Union Berlin and the match ended 1-1. Hannover 96 got promoted to the Bundesliga after a 13-year hiatus, making Ralf his first season a perfect success.

Their 11th-place result in their first season back at the top level allowed them to stabilize, but as their performance plummeted in the second half of the 2003–04 campaign,

However, Rangnick was fired in March 2004 after a 0–1 loss against Borussia Mönchengladbach leaving his position as the head coach with a record of 44 victories, 22 draws, and 32 defeats. And at the time of his dismissal, Hannover was in the fifteenth position.

Schalke 04 appointed Rangnick on September 28, 2004, when Jupp Heynckes quit just a few weeks into the 2004–05 season, having lost out to Joachim Löw for the position of assistant manager for the German national team.

Rangnick experienced European play once more because the team qualified for the UEFA Cup through the UEFA Intertoto Cup. He played in his debut game of the UEFA Cup where Schalke defeated Metalurgs Liepajas 4-0.

He guided them through the group stage, but they lost to Shakhtar Donetsk in the knockout stages. Rangnick led the team to the DFB-Pokal final, where they lost to Bayern Munich 2-1, although that competition was to be more fruitful for the club.

And In the league, Bayern defeated Rangnick’s team as well. However, Rangnick’s victory over former team VfB Stuttgart in the first game of the next season helped him win the 2005 DFL-Ligapokal.

Rangnick made its first appearance in the renowned tournament in 2005-06 thanks to its second-place league performance the previous season.

However, the squad was unable to advance past the group stage, finished ten points behind the leaders in the Bundesliga, and lost 0-6 to Eintracht Frankfurt in the DFB-Pokal.

These results were recorded shortly before the holiday break led the club to fire Rangnick on December 12, 2005. He left his position as the Schalke 04 head coach with 36 victories, 15 draws, and 14 defeats.

The team received a promotion right away, and for the first time in their history, they competed in the 2007–08 season in the 2. Bundesliga.

Rangnick left his position as head coach of Hoffenheim on January 2, 2011, alleging the transfer of midfielder Luiz Gustavo to Bayern Munich, of which he wasn’t aware of his transfer.

Rangnick’s final game was a 2-0 victory in the DFB-Pokal over Borussia Mönchengladbach on December 21, 2010. Following Rangnick’s departure, the team finished in eighth position. In all, Rangnick had a record of 79 victories, 43 draws, and 44 defeats.

Once again, Rangnick was chosen to succeed Felix Magath as the head coach of Schalke 04 in March 2011. On April 1, 2011, he played his first game, defeating FC St. Pauli 2-0 via forfeit.

After a beer mug was thrown at the assistant, the game was suspended in the 89th minute, overshadowing Rangnick’s triumphant debut at Millerntor.

Though Schalke was up 2-0 when the game was called off. However, Rangnick guided his former team to their first UEFA Champions League semi-final by defeating holders Inter Milan 7-3 on aggregate, just weeks after being appointed as the new Schalke coach.

Unfortunately, Manchester United defeated Schalke in the semifinals to end their time in the competition. In the 2011 DFL Supercup, Schalke defeated Borussia Dortmund in a shootout to start the 2011–12 campaign.

Rangnick announced his resignation as Schalke’s coach on September 22, 2011, after claiming that he had fatigue syndrome.He claimed he lacked “the necessary energy to be successful and to develop the team and the club.” He left the position with a record 10 wins, 3 draws, and 10 losses.

Rangnick announced that he would take over as coach at RB Leipzig for the 2015–16 campaign in February 2015. Alexander Zorniger immediately resigned, and Achim Beierlorzer kept managing the team until the end of the season.

Rangnick won his debut game, a 1-0 victory over FSV Frankfurt, on July 25, and on May 8, 2016, Rangnick defeated Karlsruher SC to earn promotion to the Bundesliga.

Rangnick reclaimed his position as RB Leipzig’s head coach on July 9, 2018. And In the second qualifying round of the Europa League, he defeated Swedish team Häcken to win his first game 4-0.

Also, In the third qualifying round, they defeated Universitatea Craiova. In the German Cup, Rangnick’s first domestic game and victory were against Viktoria Köln, which Leipzig won 3-1.

The first Bundesliga game for Leipzig was played on August 26, 2018, when Borussia Dortmund defeated Leipzig 4-1. Also, Leipzig eliminated Zorya Luhansk by a 3-2 overall score in the play-off round, advancing them to the Europa League group stage.

However, they were paired with Red Bull Salzburg, Celtic, and Rosenborg in the group stage, and they ended in third position.

Despite this, the team finished third in the Bundesliga, earned a spot in the UEFA Champions League for the 2019–20 campaign, and advanced to the DFB-Pokal final before Bayern Munich defeated them.

Manchester United appointed Rangnick as an interim manager after Ole Gunnar Solskjaer was fired as a result of a poor performance early in the 2021–22 season.

Before his appointment, Rangnick considered himself as the top candidate during interviews, and he was chosen as interim manager until the end of the season on November 29, 2021, despite the board’s initial decision to allow caretaker manager Michael Carrick a longer run of games while scouting replacements.

In his first game, Fred’s goal gave the team a 1-0 victory over Crystal Palace. As a coach who has all the technical skills required for success, Rangnick frequently discussed intensity, physicality, and energy.

Up to a Champions League match against Atlético Madrid in February, Rangnick’s teams had a good game. Rangnick said Liverpool was “six years ahead” of United after his team was smashed 4-0 by rivals, Liverpool, in April 2022 and stressed the need for the team to make investments in the forthcoming transfer window.

With 58 points at the end of the season, United had their worst points total in Premier League history while they finished the season in sixth position.

Rangnick was appointed as the coach of the Austrian national team on April 29, 2022, with a two-year contract beginning in June. If the team makes it to UEFA Euro 2024, a two-year extension is an option in the deal.

He wants to win back the fans by playing attractive football and exhibiting team spirit. Rangnick’s debut match as the head coach ended in a 3-0 victory over Croatia in UEFA Nations League A.

That was Austria’s only victory of the year, though, and after a 3-1 loss to Croatia on September 25, they were demoted to League B.

Rangnick is a class in the early 1990s and has proven to be a mentor to some of the best coaches in this century. So far in his coaching career, he has managed fifteen football teams both in Germany and England and he is the current coach of the Austria national team.

With lots of praise from modern coaches, he is regarded as the godfather of German football.