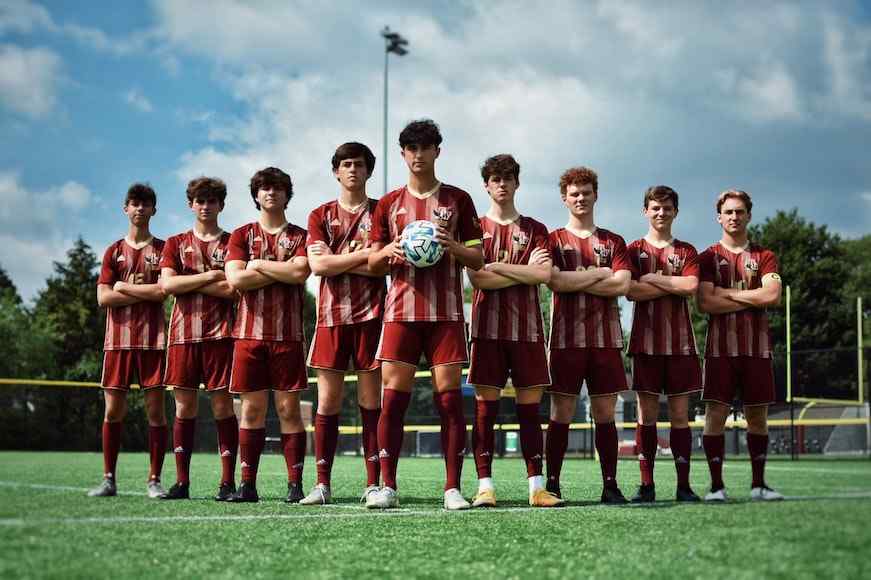 Meanwhile, every sport has the authorized number of personnel that is allowed to prosecute a game, and the round leather game if soccer is not an exception.

How Many Players Are On A Soccer Team?

Football differs a lot in different countries. There are countries where you might end up seeing 5 players or so in a team, although it mostly happens in 5 aside teams.

However, in a known standard football, there are only 11 players allowed from one side of a team, and 11 from the other, making it 22 players on a football pitch. Well, a team can have a 25-man squad registered for a season or so.

You see, out of the 11 players presented from a team to be on the pitch, there can always be a shortage of 1, 2, or more players due to sending-offs and injuries that occur during the course of the game.

So, in conclusion, a standard football game requires a total of 22 men on the pitch, 11 from one side, and 11 from the other side.

How Many Players Are On A Soccer Substitution?

After the selection of 11 players has occurred, a standard football team can have up to 3 – 12 extra players on the bench in case of injuries, or if the manager wants to make changes.

How Many Players Are On A Soccer Team Including Substitution?

Having known that there are 11 players on the pitch from a side of a team and 3 – 12 players on the bench of a team. So, the total squad number from a team in a match varies from 14 – 23. However, there is always an option to extend the squad number.

How Many Players Are On A Soccer Field?

Just as I stated earlier about the number of players on a soccer field, only 22 players are allowed to partake in a pitch, although there can be a decrease in quantity due to sending-offs or injuries after substituting all players on the bench.

The 22 players that find themselves on the pitch are equally divided into two teams which are 11 for one team and 11 for the other.

Are There Up To 11 Positions In Soccer?

You see, there can be up to 11 positions for each of them from a team, but literally, there are only four positions for the 11 players.

How Many Positions Are In Soccer?

There are only 4 positions in soccer although they might differ due to a team’s formation or ball pattern.

What Are The Positions In Soccer?

Having known that there are just four positions in football for 11 players, the first position is for the goalkeeper, and in a 4-4-2 formation, four defenders take the first four, four midfielders take the second four, and the last 2 are for the forwards.

In all formations that are allowed in football, the goalkeeper’s position does not change nor do they have two goalkeepers in a goalpost.

Why Do Soccer Positions Change?

The main reason why football positions change is due to tactics, the positions change when a formation is changed. However, football does not just change instantly, an order is given by the Manager, Assistant Manager, or Team Captain.

In this article, we have established that there are 11 players on a soccer pitch for a team and 22 players in total if players from both sides are considered.

There is also a provision for substitutes on the bench for each team. It should be known that substitutes in soccer are a concept that allows for the replacement of players on the pitch when teams are in action.

Additionally, teams have a matchday squad of 23 to 30 players per game for the whole season or for a tournament and they get to select the starters and substitutes from this list of players.